The 16th Street Baptist Church Bombing still resonates today and tragedy in the history of the US and in the state of Alabama. At 10:22 a.m. roughly 15 sticks of dynamite exploded under the steps of the east side of the church causing mass damage. The four girls who were killed were in the basement of the church of changing into robes for a play entitled “A Love That Forgives”. The church received an anonymous phone call roughly a couple of minutes before the explosion saying “Three minutes”.

The four girls who died in the explosion:

The explosion shook the church blowing a five foot deep crater and hole in the brick wall. It also destroyed cars in the parking lot, blew out all the windows in the church except one and caused damage to windows up to 2 blocks away.

Time article 16th Street Baptist Church Bombing Survivors Recall a Day That Changed the Fight for Civil Rights: ‘I Will Never Stop Crying Thinking About It’ 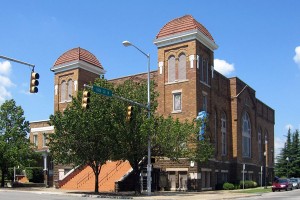